House of Lords report calls for overhaul of the construction industry

It is a common headline, based around reports that the housing and infrastructure needs of the UK cannot be met efficiently by the construction industry as it stands. Now there is also an evidence led report published by the House of Lords concerning the off-site manufacture in the construction sector calling for a ‘radical overhaul’ of the industry to make it more collaborative.

The report praises the new ICE ‘Project 13’, an ICE business and working model offering a new way of thinking to reduce costs to the public over the lifecycle of assets, less disruption during construction and a more equitable division of work throughout the country. Project 13 is based on an enterprise approach rather than a traditional transactional approach to improve on the delivery of infrastructure projects, raise productivity levels and the performance of the infrastructure networks.

The House of Lords paper, describes the construction industry as too “fragmented” to be able to implement a ubiquitous off-site manufacturing approach. This approach needs an early and effective collaboration between clients, contractors and design professionals which is an area that Project 13 seeks to address.

NASA Aerosol Map of the Earth is ‘breath-taking’

NASA have produced a map to show global aerosol levels on the 23rd August 2018. The map shows levels of black carbon, dust and sea salt in the atmosphere around the world on this date highlighting the presence and effects of natural and man-made phenomena. Inhalation of some aerosols can be harmful to health, and high aerosol levels are also associated with high pollution in towns and cities.

Aerosols are liquid or solid particles that are present in the atmosphere capable of heating or cooling the earth depending on their size, type and location. They can also encourage or inhibit cloud formation, again causing temperature changes at the earth’s surface. NASA uses a host of satellites and ground based sensors to measure the amounts of aerosols in the atmosphere at key points alongside many mathematical tools and data analysis techniques. The map contains visual data that can pinpoint events occurring at that location on the ground. For instance, there are high levels of black carbon over the US West Coast and Canada due to agricultural fires helping to clear land. On the datethe map was generated, the active typhoons off the coasts of Japan and South Korea were indicated on the map by higher levels of sea salt. The Sahara Desert storms also produce massively elevated dust levels in these areas at certain times of the year.

This data map can be used alongside sophisticated meteorological tools to help us monitor the weather and the impact of global events on populations. 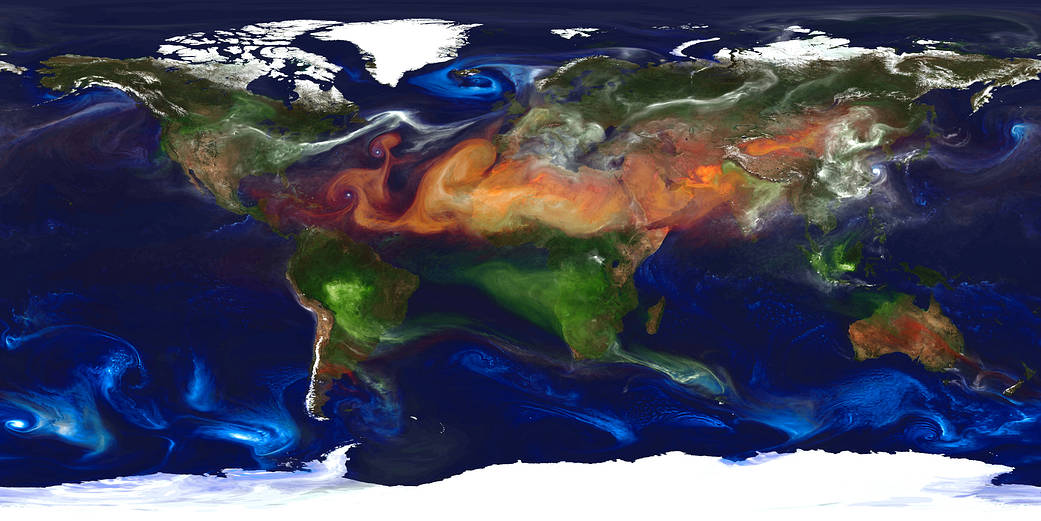 Electronic engineering and technology giant LG are unveiling an exoskeleton that aims to make life easier for those requiring support for standing, walking and working. The exoskeleton, in the form of a ‘Wallace and Gromit’ style pair of worn trousers, helps to increase mobility and actively improve lower limb strength (avoiding muscle atrophy for long term wearers).

The Suit Bot, due to be exhibited for the first time in Berlin at the IFA 2018 show, has been developed with new company, the South Korean based SG Robotics. The Suit Bot contains in-built AI technology allowing it to monitor environmental and biometric data from the wearer and then adapt to ensure an optimum level of movement and stance to allow for maximum efficiency to the task being undertaken.

The Exoskeleton will join other LG ‘service robots’ unveiled at the CES 2018 in Las Vegas in January within a ‘Smart working network’ collecting information for analysis and the efficient delivery and planning of tools and maintenance within the Logistics, distribution and manufacturing industries.

Time is ticking for NASA Rover

NASA’s Opportunity space rover has been collecting data and completing missions on Mars for decades, far longer than its original mission time. Unfortunately, a massive dust storm encompassed the Rover around early June of this year. The Rover has not been heard from since, and there is a concerted effort in place to re-establish communication with Opportunity.

The dust storm would have blocked all sunlight to the Rover’s solar cells causing a low power fault. However, the skies above Opportunity have now cleared meaning the batteries should have been fully charged again by now and the robot should have communicated with the team on Earth to report the end of its ‘low power hibernation period’. As there has been no communication since the storm, it could mean that dust deposits on the solar panels have blocked sunlight reaching the photovoltaic panels. The team at NASA believe that there has been a low power fault and a probably issue with the mission clock and communication device. The team are listening passively for any signs that the rover is functioning but also actively communicating and sending commands three times a week to try and elicit a response. They are also working to try and remedy any possible faults as much as they can over the next couple of months.

Work on re-establishing a connection is planned to continue from now to January 2019 if needed. If no response is received by then and once the Opportunity team have reported their findings, either further action will be taken, or the Rover will be declared ‘officially dead’. Fingers are crossed throughout the team that there will be contact soon.

In early 2016, Apple announced that it had reached a milestone of 1 billion active devices around the world. In early 2018, that number had reached 1.3 billion. In a market where some consumers prefer cheaper phones with larger screens and fierce rivalry from other mobile phone companies such as Samsung, Apple’s main challenge is keeping things fresh and competitive whilst increasing revenues.

It has been ‘leaked’ that Apple is intending to release three new phones, but it should be noted that there is no official announcement of these products as yet. The mobile devices will reportedly consist of a high end iPhone, an upgrade to the iPhone X and a ‘cheaper’ device to replace the iPhone 8. All three phones will have facial recognition, edge to edge technology and a gesture-based control system. The screens will reportedly be diagonal measurements of 6.5 inches (for the high-end phone), 5.8 inches (for the ‘mid-range type’ phone) and 6.1 inches for the replacement to the iPhone 8 (being the cheaper model of the three). The two higher range phones will allegedly have OLED screens, and a stainless steel and glass casing. The cheaper of the three models will have an aluminium and glass casing.

Shares in the purported supply companies for the three potential new phones rose on the news of Apple’s plans. Alongside their mobile phones they are also working on updated AirPods (wireless charging units), a revitalised iPadPro and a new Apple watch.

More about The Starjammer Bulletin

The Starjammer Bulletin is the official newsletter for The Starjammer Group, its customers, clients, affiliates and subscribers. With over ten years under our belt, we are proud of our commitment to our clients, and of our assurance that we provide them with the best level of service and help that they have come to know and respect us for. The Starjammer Group is proud of its track record to date, and strives to improve its products, services and standing on all fronts. Our mantra has always been '21st century thinking'. Why? Simple: we love doing what we do, enjoy our work, and work on the principle that our customers, clients and associates should share in the fun. Business shouldn't be a chore: we spend on average 8 hours per working day in the office, or factory, behind a desk, stall or wheel. We employ people who are not only competent and good at their job, but people who have that something; that little spark that grabs our attention. It can't be defined, and it's not always obvious. Nethertheless, we have been lucky to attract and keep the right people. Something we are proud of.